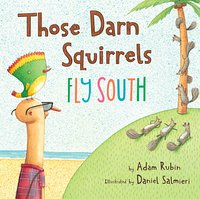 There’s a Mr. Fookwire in every neighborhood. He’s a solitary grump who likes only one thing: painting the birds in his backyard. Oh, Mr. Fookwire has lots of hates. He hates the squirrels who eat the birds’ food and outwit his diabolical squirrel traps.  He hates it when the birds fly south and leave him behind. What do those darn squirrels do? They hatch a plan for themselves so they can fly south, too! The two reasons for him to get up ion the morning, his loves and hates, have left.  What’s a man to do? Go south! There are three books about Mr. Fookwire and those “darn squirrels,” each filled with surprising humor and wry jokes. Note to Adult Reader: See who guesses first that Mr. Fookwire has a carrot for a nose. You or a three-year old?
Great for Skype, Facetime and laps! 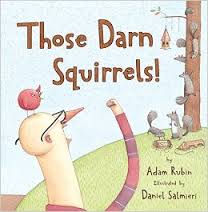