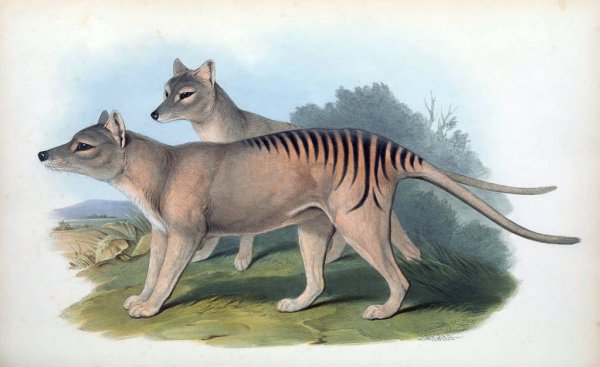 I haven’t posted anything recently because I have been busy working on a new book (about the bogeyman) and preparing for my visit to North Buncombe. Last Friday was the date of my visit and it was terrific! I spoke with 700 students! They were wonderfully attentive and fun to be with.

I DO have something new to share with you. One of the most interesting extinct animals I have learned about is the Thylacine tiger from New Zealand. It was thought to be extinct. Actually, it still is. But look at what the scientists have done with a bit of its DNA. It’s surprising.

The world thought it had seen the last of the Tasmanian tiger in 1936 when Benjamin, the sole surviving member of Australia’s lost packs of big marsupial carnivores, died in Hobart Zoo.

But a team of Australian and American scientists have brought at least a trace of the extinct animals back to life in a world-beating experiment that activated thylacine genes from museum specimens in the embryo of a mouse.

Tiger DNA introduced into the embryo resumed biological activity – the first time genes from an extinct species have triggered a response in another living organism.

In time, and with a great deal more work, researchers believe the breakthrough could ultimately enable the resurrection of not only the tiger but also of other extinct species.

In the meantime, they said their work could help scientists unlock and understand many of the secrets still surrounding dinosaurs and other animals lost to the world, and further the development of biomedicines.

The publication of the team’s work yesterday in the international science journal PLoS ONE followed earlier, disappointing attempts to resurrect the tiger using DNA from museums.

Plans announced in 1999 were dropped three years later after scientists at Sydney’s Australian Museum could not find thylacine DNA of sufficient quality, although one of the key researchers, Professor Mike Archer, later said it was still hoped that the project could be renewed using new techniques.

Archer, now Dean of Science at the University of New South Wales, told ABC radio that the reactivation of the thylacine DNA in a mouse embryo was a significant step forward, and that he believed extinct species could be brought back to life.

“I’m personally convinced this is going to happen,” he said.

“We are working on a number of projects like this.

“I’ve got another group working on another extinct Australian animal and we think this is highly probable,”he said.

Researchers who achieved the new tiger DNA breakthrough are far more cautious, and said yesterday that there was no way the technique could be used to bring back an entire thylacine, or any other extinct creature.

Previously researchers could only examine the gene sequences from extinct species – but now they would be able to examine the functioning genes of a vast range of lost creatures, from dinosaurs to mammoths and Neanderthals.

And the future could bring incredible new advances, with rapid advancement in gene sequencing likely to produce the entire thylacine genome within a few years.

To bring an extinct species back to life would require a vastly more complex and difficult programme matching tens of thousands of genes to their correct positions in chromosomal packages.

Professor Marilyn Renfree, Federation Fellow and Laureate Professor at Melbourne University’s zoology department, said the pace of scientific discovery was advancing at such a pace that it was conceivable that extinct animals could one day be brought back to life.

She said that the DNA used in the project had been taken from 100-year-old specimens from Melbourne’s Museum Victoria, and had been inserted into the mouse embryo with a “reporter” gene, which produced a blue colour indicating the thylacine DNA was functioning biologically.

The tiger gene used in the experiment has a similar function in developing cartilage and bone as its counterpart has in the mouse.

“We were very, very excited when we saw it working,” Renfree said.

As well as allowing researchers new access to previously lost genetic biodiversity, Renfree said the team’s discovery was critical in a time when extinction rates – especially of mammals – were increasing at an alarming pace.